Doing Math with Python is written by Amit Saha and published by No Starch Press. It has been translated to French, Simplified Chinese, Korean and Japanese. 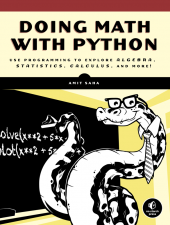 There are seven chapters and 2 Appendices in the book. A detailed table of contents is available from the publisher's website.

This chapter starts with the absolute basics of handling numbers in Python. It discusses integers, floating point numbers, fractions, complex numbers and performing operations with them.

This chapter introduces Matplotlib and shows how to create graphs representing collections of numbers.

As the title suggests, this chapter is all about the statistical measures one would first learn in high school – mean, median, mode, frequency table, range, variance, standard deviation and linear correlation are discussed.

This chapter starts off with how to create a set and demonstrating the common set operations. Utility of the different set operations are demonstrated via simple applications. For example, Cartesian product is used to write a program to simulate an experiment to calculate the time period of a simple pendulum of different lengths and at places with varying gravity. Union and intersection operations are applied to finding the probability of events.

The chapter then moves onto discussing how to generate uniform and non uniform random numbers, and using them to simulate scenarios such as a die roll and a fictional ATM which dispenses dollar bills of different denominations with varying probability.

This chapter is logically divided into two parts. The first part introduces the reader to matplotlib patches which allows drawing geometric shapes (circles and polygons), followed by matplotlib’s animation API which allows drawing animated figures. The trajectory of a projectile motion discussed elsewhere in various contexts is animated combining both these things.

The second part of the chapter introduces the concept of geometric transformation. Combining that with the knowledge of generating random numbers learned earlier in Chapter 5, the reader will learn how to draw fractals such as the Barnsley Fern, Sierpinski triangle and Mandelbrot set.

This chapter discusses solving differentiation and integration tasks using programs. As applications, the gradient ascent (and descent) methods and continuous probability are discussed.

This appendix covers the installation of software required to run the programs in the book on Microsoft Windows, Linux and Mac OS X.

This appendix discusses some Python topics which the reader may not be familiar with, but are needed to follow some parts of the book. It also includes topics which provide additional information beyond that required for the programs in the book.

You can stay connected with the book, its readers and me via the following channels: